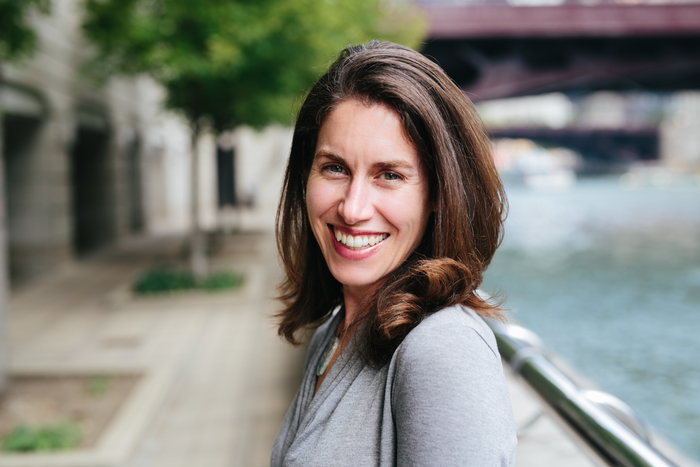 I grew up in Florida and went to college in North Carolina. That’s where I met my husband. After graduation, we both went to work for GE. My job took us to Australia; his took us to Shanghai.

I was 29 years old and had been living and working in China for about a year when I had my first generalized tonic-clonic seizure. It happened in the middle of the night, waking my husband who got me into a taxi and took me to a hospital. Being disoriented, I hurt my ankle while getting out of the taxi. At first, I thought we had gone to the hospital for my ankle but that was because I was in a confused postictal state.

The doctor at the hospital in Shanghai gave me an EEG and told me that it looked like I could have a seizure disorder. He suggested that I go back to the United States for further testing. We flew back to the States for an appointment at the Mayo Clinic that included another EEG.

When my husband and I met with the doctor, he wasted no time and told me that I had epilepsy.

Right away, he asked if we were planning on having kids. I just wanted to stop and breathe for a moment to process the situation. A couple of weeks prior, my husband and I had been celebrating our 5th wedding anniversary with a scuba diving trip to Vietnam, and now I had just received an epilepsy diagnosis and was being urged to act immediately on any plans to have children because I would be on anti-seizure prescriptions for the rest of my life.

I resigned from my job because it was tough for me to travel independently within China while I learned about epilepsy and experienced the change it was bringing to my life.  Fortunately, I was able to get pregnant and give birth to a healthy baby girl.

My daughter was born in Shanghai. We had gone back to China after my diagnosis and ended up staying there another two and a half years. I would get prescriptions filled and visit the Mayo Clinic when I went back to the U.S. to visit family.

My epilepsy mainly manifests as a complex partial seizure (CPS, also known as focal onset impaired awareness seizures) that lasts about a minute. During the seizure, I lose all situational awareness. People can talk to me, and I may look at them, but I am unaware of my reactions or movements during a CPS.

A one-minute seizure doesn’t sound too bad, but each seizure basically knocks me out for an entire day, draining my energy and leaving me exhausted with a massive headache. For years, even with the anti-seizure drugs, I would typically have two to three of these complex partial seizures per week. You think about losing 100 to 150 days every year to seizures and post-seizure exhaustion, and that provides a better sense of how complex partials can interfere with your productivity and quality of life.

By contrast, I’ve only had about nine generalized tonic-clonic seizures (GTC). Three of these GTCs occurred during my final week of pregnancy, when increases in blood volume effectively diluted the concentration of anti-seizure medicines in my bloodstream. Those seizures resulted in me having an emergency C-section to deliver my healthy baby.

In 2010, we moved back to the States and settled in Hoboken, New Jersey. With all of the anti-seizure medications I tried, I would have a short honeymoon period while I titrated off one medicine and onto another one. Then my body would adjust, the seizures would get worse again, and we’d repeat the cycle.

While a patient at NYU Langone, I tried 10 different drugs, but none of them worked for long. That’s when I started considering brain surgery.

I participated in invasive diagnostic testing at NYU, but the doctors were not able to clearly identify the exact source of the seizures within my left hippocampus. Without being able to pinpoint the source, they told me that any resection surgery carried too great a risk of damaging both my speech and memory capabilities. My neurologist told me about the RNS System that was in clinical trials at the time. We talked about how it could be a great option, because the RNS would target my seizure area and so we could avoid doing a resection. While I waited for the FDA to approve the RNS System, I kept trying to control my epilepsy with medications.

At the end of 2013, the RNS System was finally approved. I was excited to learn that I had this option, since the anti-seizure drugs were not working on their own.

By this time, we had moved again from Hoboken up to Boston, so when I showed up at Massachusetts General Hospital, I just wanted to get the RNS System as soon as possible. Of course, I had to go through a whole testing protocol with video EEG and everything else to make sure that I was truly a good candidate, but in September 2014 I had the placement surgery.

I don’t want to say that the surgery was pleasant, but it wasn’t all that bad. I only had to stay in the hospital overnight and remember feeling surprised and comfortable that I was discharged so quickly.

The swelling and achiness were both minimal and I didn’t even feel the need to use all of the prescription-strength painkillers I had been given. There was some tenderness on the back of my head where the RNS device is placed, but even that sensation faded after a few days.

The surgery did not require me to shave my head. In fact, I just went in for another procedure last year to change the neurostimulator (routine replacement for the battery) and they simply flipped back my hair, shaved a spot to access the device, did the procedure, and flipped the hair back so that it covered the incision site.

Since I received the RNS System, the biggest physical improvement has been to minimize my simple partial seizures (SPS, also called focal onset aware seizures). I used to have an ‘icky’ feeling that I would characterize as ‘noise’ or ‘static’ – like an aura that never quite manifested into a full seizure. Those simple partials are completely gone now.

Another success is the fact that I have not had any GTC seizures since I got the RNS System. The last one happened before the procedure when I stopped all my medications during the time that I went into the hospital for monitoring.

Since the RNS surgery, my CPS frequency has leveled off. I do have them on a regular basis and can sometimes still have them three times per week, but the average is consistently closer to once per week. These CPS typically go more quickly, and I recover more easily. The reduction in CPS frequency and intensity is comforting.

This has helped me realize that stress is probably my biggest trigger, but sleep and diet can also play a role.

The longest time I’ve gone without a seizure since the RNS placement has been 3.5 weeks and it was when I was training for an obstacle course race (OCR) a couple of years ago. I thought the constant exercise might have played a role, so I resurrected my exercise routine and competed in another OCR in November 2019.  The return to a regular exercise routine did help, and while I did not have another span as long as 3.5 weeks, I did have a 10-day span and a 9-day seizure-free span during the training.

The bottom line is that my doctors and I are still searching for the ideal stimulation settings for RNS to try to get me seizure free. We have spent five years changing variables on the device and trying different combinations. When I have rough days, I do have to remind myself that at least the ‘noisy stuff’ – the simple partials – are gone now. I don’t have to deal with the anxiety and ‘creepy’ feelings that I used to experience before.

We all have our standards and our wish list. I know that my seizure rate and my lifestyle are much better than many other people who live with epilepsy, but I am driven to get to zero. So my care team and I will keep fighting and trying to find ways for me to get better.