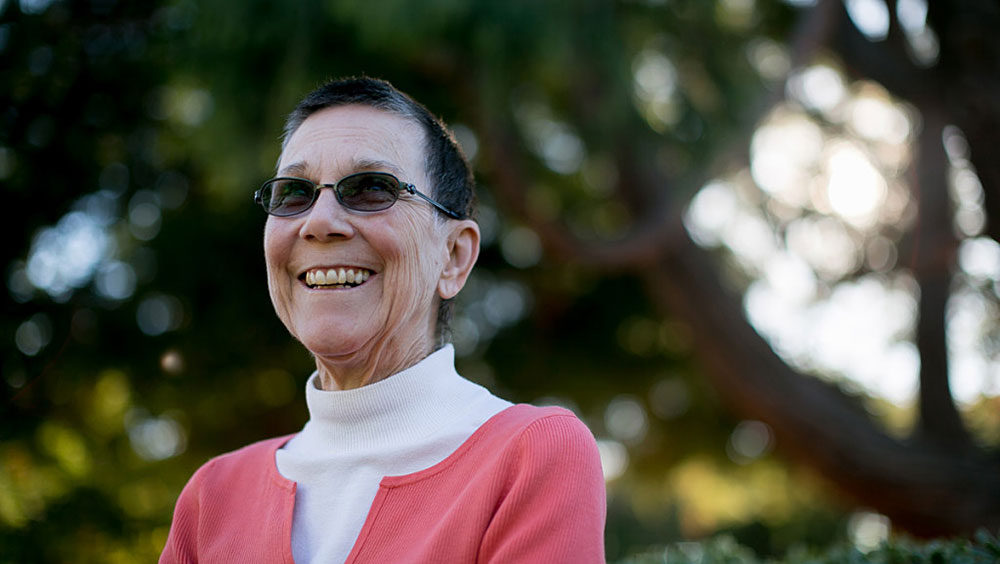 My name is Connie. I’ve had epilepsy for about seven years now and I’ve had the RNS for about three months.

The first seizure I had was when I was 60, I mean almost exactly when I turned 60. Initially, it started as this huge feeling of dread, and I thought, “What the heck is this?” I ended up going to the emergency room and the doctors tested everything to do with my heart which was fine, so they sent me to a gastroenterologist who also did every test imaginable which also came up inconclusive. I couldn’t get anybody to figure out what it was and I thought if I described it really, really well, somebody would go, “Aha! I know what it is.”

Finally I had a seizure while I was at the doctor’s office and the nurse practitioner who was with me said, “It’s your brain.” So that started the process, but my first neurologist tried treating me with medications for migraines — it didn’t work. So I spent about a year not doing anything about it and every four weeks I’d have a series of seizures 40 minutes apart which made me tired and dizzy and just stupid. I would get to the office the next day, sit at my computer and not even remember my password.

As time passed, I saw other neurologists but nothing was working. I went through about nine medications, meanwhile hearing it should only take about two or three tries to find the right ones. So I knew meds weren’t working.

Finally, I was referred to Stanford University. We went from trying more meds to undergoing a brain mapping procedure to see if I was eligible for brain surgery. At first, it looked like I would be a good candidate but ultimately we discovered that the seizures were happening in my language center.

As I continued to look for other options, the RNS System was my least favorite at first. I thought, “I don’t want something in my head.” I don’t know why now, but at the time it didn’t appeal to me at all and I just kept pushing it away.

Finally, I concluded, “Alright, you’ve tried all these medications—they didn’t work. You’ve gone for the surgery—it didn’t work. Why are you not trying this? It’s there, try it.”

So three months ago I underwent the procedure to have the RNS System implanted and I have to say it was very easy. I suppose because there’s not a lot they actually do. They’re dealing with the bone in your head that can’t feel anything. They put the wires into or around the brain — it can’t feel anything either. So it’s like a cut; you just wait for it to heal.

My recovery was easy. Taking down information from my brain to the computer every day—piece of cake, easily done. As far as I can tell, I’m not experiencing any side effects — I don’t really feel it.

When it was first implanted, the RNS was programmed to just record information, not stimulate to treat seizures just yet. My doctor got the first report back and pretty quickly she called exclaiming, “This is really exciting! We are seeing them come from one spot consistently, and it is the spot we put this in. Do you think you could be here at 12:15 tomorrow because I’ve got 15 minutes and I want to turn it on to respond to what we’ve been seeing.”

I think my seizures are a particular kind that are hard to see or describe, and it’s been such a long time suffering with something that others don’t understand.

Finally, the RNS System like nothing else, lets people see and understand what’s happening in my brain

…when it’s happening, how long it’s happening, etc. All those things are just amazing. It’s interesting but it’s also very useful in ways that just listening to me describe these things was never useful enough. It’s actually much more exciting than I envisioned it. I think it’ll be very fruitful.

Now that it’s been turned on, I’ve detected that I’m starting to have a seizure — I know the steps it goes through — and then it ends before it gets to all the parts I’m used to. Incrementally they’re increasing the response to my seizures, and it’s expected that it’ll take them a while to get it just right. So I’m in that phase right now.

I feel really confident. I think one of the things that convinced me to get the RNS System for sure was the fact that people could improve over time—what you see over six months could be a big change, but over two years could be an even bigger change.

In the future, if I have fewer and shorter seizures, I’m hoping I won’t be stressed about planning things with family or friends and worried I’ll be too exhausted from a night of seizures. And that’s come up a lot; people stopped wanting to travel with me, stuff like that. It hurt my feelings. So this definitely is something where having less seizures can mean I can spend a lot more time doing the things I want to do instead of being hit with the anxiety and stress of, “I hope I didn’t have a seizure that day.”