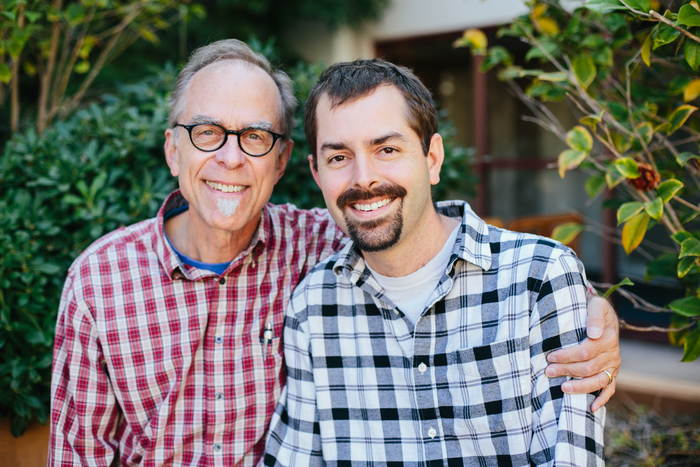 When my son, Gabe, was 4 years old, his mother and I got divorced. After that, Gabe lived with his mom, so he and I were not all that close when he was growing up.

That changed quickly when Gabe suddenly developed epilepsy at age 17. I saw him have his first seizure. Gabe and I were at the gym shooting hoops. There was a pickup basketball game taking place on the court next to us. Suddenly Gabe started describing what sounded to me like visual hallucinations. He was point at the backboards and talking about the colors he saw there.

Then he started wandering into the middle of the game on the neighboring court. He seemed totally unaware of his surroundings. When I walked over and grabbed him by the arm to stop him, he turned to look at me with such disdain, I could tell that he didn’t recognize me at all. It was a freaky situation.

When Gabe settled down a little, I got him into the car and took him to a nearby emergency room. While we waited in the ER, he was drifting between episodes of clarity and times when he was totally confused.

The emergency room staff did not diagnose Gabe with epilepsy, but they did say that they thought he had been experiencing absence seizures, and they referred us to Gabe’s primary care provider. That physician in turn referred us to a neurologist, who prescribed anti-epileptic medicines.

At that point, I knew little about epilepsy, but I was determined to learn more.

I became Gabe’s primary caregiver and we started our journey toward understanding and finding a treatment for Gabe’s epilepsy.

Unfortunately, the following years were a difficult downward spiral. Multiple medications failed to control Gabe’s seizures. Some of the grand mal seizures caused to Gabe to fall and suffer several injuries.

It took us almost three years to find a medication regime that controlled the grand mals. Even then, Gabe continued to have 15 to 20 partial complex seizures each month and was in a constant state of distress. He couldn’t eat or sleep. He suffered day-long panic attacks where he saw hallucinations. He lost close to 40 pounds and looked like he was at death’s door. Unable to function, Gabe dropped out of college and spent his days in survival mode.

Finally, after five years, we were referred to an epilepsy center in Minneapolis and first saw an epileptologist. Gabe was admitted to the center for an inpatient video EEG study that revealed the cause of his epilepsy to be bilateral heterotopia. Unfortunately, the testing also showed that he was not a good candidate for resection surgery.

That epilepsy center eventually referred us to New York Presbyterian, where they were running a trial of the RNS System. I spoke to a neurosurgeon there over the phone, and he told me, “I think we can help your son.” That was our first ray of hope after five long years!

We did visit New York Presbyterian, and Gabe had his RNS device placed there in February of 2005.

I was anxious about the surgery, but I had attended the consultation where treatment options were discussed, and I was convinced that RNS was the right choice. I knew that Gabe was terrible shape, so I encouraged him to proceed, and he ultimately made the decision to get the RNS System.

The RNS System has been a real life-changer for Gabe and everyone involved in his care.

Prior to getting the RNS System, Gabe was barely hanging on. I was constantly worried about his future and scared that he would become so debilitated that he would end up in an inpatient facility. Every time I heard a siren, I thought it might be for Gabe – that he might have fallen and injured himself again.

The first time that we traveled to New York City for Gabe’s care in 2004, I wouldn’t let him go outside alone. My son was 22 years old at the time, so understandably this caused some conflict between us, but I insisted to accompany him. At that point, I figured it was unlikely that Gabe would ever be able to live on his own.

But with the help of the RNS System, Gabe proved me wrong. In 2008, he completed his college degree. In 2010, Gabe obtained his certification to be a substance-abuse counselor. In 2011, he got married. In 2015, Gabe and his wife moved to New York City.

Honestly, seeing him become so independent stirred up mixed emotions in me. In the early years of Gabe’s epilepsy journey, he was totally dependent on my daily, hands-on care. I always had the long-range goal of Gabe becoming independent, but each step toward that independence was painful for me.

For example, up until the time that Gabe moved to New York City, I had always accompanied him to his medical appointments. But now he goes by himself to see his neurologist every quarter. That was an adjustment for me – knowing that he would be doing those things by himself.

Having spoken to other caregivers, I know that these emotions are not unique to me.

As caregivers, it’s often a challenge to let go. This independence is exactly that goal that I had in mind for Gabe, and it’s what he worked for all these years. I’m thrilled to see him living independently and convinced that it’s the right thing for him to do, but I was surprised by just how hard it was to let go.

So both of our lives have changed tremendously since Gabe got the RNS System, but those changes didn’t occur overnight. Gabe’s process was quite slow at times, but as his epileptologist adjusted the setting on his RNS device, we began to see gradual improvement. Slowly, Gabe gained weight. His fears subsided and his moods grew more stable.

Today, Gabe has an average of three seizures per month. So his life is still complicated, but immensely better than it was prior to getting the RNS System.

I attend a monthly Epilepsy Education program, which is a terrific resource provided by the Epilepsy Foundation of Missouri and Kansas. Meeting other caregivers in these contexts provides an immediate sense of community. We have a common language, we have traversed similar paths, and so the commonality of our experiences automatically enables us to forge a common bond.

The caregiver community provides a depth and immediacy of connection that’s hard to find with folks who have not been through those same experiences. I have good friends who are supportive, who know Gabe, and who care about him, but they don’t have the same first-hand knowledge of the struggles I went through, particularly in the early years, where I struggled on a daily and monthly basis to find answers and figure out how I could best support my son.

As Gabe has gotten better, I’ve regained a significant amount of time that I can devote to my work and other activities. Gabe and I do still talk on the phone each time he has a seizure, but he leads a full and independent life now with his wife in New York City.

Before, I always felt like I needed to be close at hand and easily reachable in case Gabe needed me in an emergency. Now that Gabe is doing so well, I’ve been able to take international vacations with my wife – something that I never would have considered doing before Gabe got the RNS System.

I’m incredibly grateful for the positive impact that the RNS System has had on Gabe’s life – and by extension, on my own life as well.