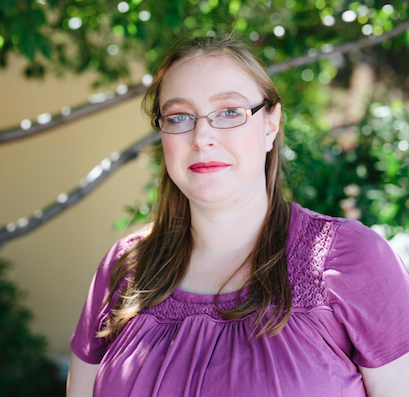 Hi, my name is Erica, and I had my RNS System placed in 2016. My struggle with epilepsy started about 9 years ago. I was halfway through college and developed a case of encephalitis – swelling of the brain. To this day no one really knows what caused it; their best guess is some sort of autoimmune response. I had gone home for the weekend and ended up having a tonic-clonic seizure; my fiancé brought me to the hospital and I spent the next 2 weeks there. I was having seizures nearly constantly, and the encephalitis wiped out my memory from basically the previous year. Eventually the doctors got the swelling down and infection treated, but I’ve had seizures ever since.

It took me almost a full year to get an official diagnosis of epilepsy. I kept having what I called “light-headed spells” that I later found out were seizures.

I went to see multiple doctors for them, but kept being told they were panic attacks. They were terrifying; I would feel intense déjà vu or feel like everything around me wasn’t real. I wouldn’t be able to talk, I couldn’t understand what people around me were saying, I’d feel sick to my stomach, my arms would get all tingly, and I’d even hear voices. I thought I was going crazy. The worst part, they would happen multiple times a day! I also had 3 more tonic-clonics, and that’s what finally prompted the epilepsy speculation. I had been on meds since my hospital stay, but they weren’t really helping. I finally got admitted for a video-EEG in a hospital that caught my “lightheaded spells” and determined that they were simple partial seizures. I finally knew what was going on.

Unfortunately, finally knowing what it was didn’t help much. I tried a few different medications and they seemed to finally stop the tonic-clonics. But I was still having my simple partials daily. I kept my driver’s license for a year or two, until I crashed my car. At that point I realized it was worse than I had thought. I had been having more severe seizures, but didn’t realize it. Again, I tried more meds, but nothing seemed to make a difference.

At this point, I was getting fed up. I had tried 6 different meds and was still seizing almost daily. The seizures would totally wipe me out. I’d need a nap after each one, they were happening often enough that they were affecting my schoolwork, and the side effects from the meds were awful! I would have mood swings, memory issues, and just my ability to think and communicate was seriously effected. I had done enough research into epilepsy and was seeing an epileptologist, so I thought I’d ask about alternatives to medication.

When I went in to see my epileptologist, it was my intention to discuss other dietary options, medical marijuana, or a device called a VNS that I had read about.  I wanted to try something new – something other than adding another medication.  And brain surgery was off the table.

When I sat down with my neurologist, I told him these things, and he cautioned me to have an open mind about surgical alternatives.  He understood why I would not want to consider any type of resective surgery as my seizures were thought to originate in the memory center of my brain.  He also knew that I had tried the ketogenic diet in the past with limited results.

For my types of seizures, he recommended the RNS System because it is a treatment able to detect and stop the seizures where they originate.

He carefully explained that in a technical sense it was brain surgery, but it was not a resective brain surgery – no brain tissue was being removed.

After my conversation with the epileptologist, I was optimistic of the RNS System. It sounded great.  A device that stops seizures before they progress or before they even start? How awesome is that! But the thought was pretty scary too. One of the qualifications with the RNS System is that my doctors needed to know where my seizure focus was, and we didn’t know that yet.

In order to find my seizure origin points, I did have to undergo an invasive EEG, also known as Phase 2 – where they put electrodes directly into the brain. It wasn’t nearly as scary as I’d thought. It was mostly just like every other video EEG that I’d done, boring.  The doctors did get the information they needed; they found 2 places that my seizures were starting; my left hippocampus and my right temporal lobe. Since all my seizures were consistent in their origin, I was a great candidate for the RNS System. I had a really good chance of suppressing my seizure activity. I was thrilled!

Since I’d already done the invasive EEG, the surgery for my RNS device wasn’t bad at all. They did shave a little bit of hair, but only along the incision site, and my other hair covered it up pretty nicely. The surgery itself was a few hours long, and I was in the hospital for less than 2 days. I took some time off work to recover, but I was back within a few weeks. It was a pretty easy recovery too; I had pain meds but didn’t really need them after a few days, and the hardest part was just not scratching my head as my hair grew back.

Now that I’ve had my RNS for a while, I love it. If I didn’t know the process I went through to get the RNS device, I wouldn’t even know it’s there. My hair has grown back nicely and you can’t see anything. I can’t usually tell when the RNS device is working because I can’t feel stimulation at all.  Sometimes, I’ll be able to tell when it’s working because I will feel an aura start, but by the time I go to sit down and prepare myself for the seizure, it doesn’t happen. It just disappears before it develops.  I also have noticed there are no side effects with stimulation.

I spend a few minutes every day uploading my RNS device information to a laptop that is included as part of the RNS System, and send that information to my neurologist once a week. It’s super easy. Whenever I go in for an appointment we discuss what has been recorded and whether we need to make adjustments to the RNS device’s stimulation. The RNS device is monitoring my brain activity looking for and recording any seizure activity.

My life with the RNS System has changed dramatically. When my RNS was placed, I spoke with my doctor regarding my goals.

I am still having seizures a few times a week, but those seizures are significantly better than they were before.  Before the RNS System, even a simple partial seizure could have forced me to lie down for a nap or face nearly crippling exhaustion for the rest of the day. Now, I am able to return to whatever it was I was doing within 5 – 10 minutes. I have observed a significant reduction in the complex partial seizures, which means less time spent confused and wondering what day it is.  Most importantly, my seizures are not as frightening, they’re not as debilitating, and I feel more like a normal person than I have for the past 8 years.

The benefits, for me, of the RNS System go beyond the seizure count. For me, the most significant benefit is the 33% reduction in medication that has accompanied my RNS therapy.

As I understand in speaking with my doctor, I realize that everyone has different goals, and not everyone can achieve a medication reduction.  For my husband and I, we wanted to reduce the medications so that we could start a family.

Before the RNS System, we had made the choice that we would explore opportunities to adopt a child.  We both wanted to have biological children, but recognized the limitations in place by all the medications I was on.  In consulting with my doctor, I understood that one of my medications was far too risky to chance on a pregnancy.  However, together with RNS therapy, I was able to eliminate that medication entirely.

Now, not only am I having fewer seizures with fewer side effects – meaning that I can do things such as finish my sentences – but I am happy to say that my husband and I are expecting our first child, a son, at the end of March.  Without the RNS System, I do not know how this could have been possible.

The RNS System is not a miracle cure, but is has worked wonderfully for me.  I do still have seizures, but I feel as though I can live my life again.  Without the RNS System, we would not have been able to start our family.

With every visit to the doctor and the continual changes made to the RNS settings, I can track my seizures and observe how they improve.  I remain confident and hopeful that my seizures will continue to improve with time, and I am ecstatic to see what the future holds for me, my RNS, and our growing family.

Note: The safety and effectiveness of the RNS System has not been studied in pregnant women.