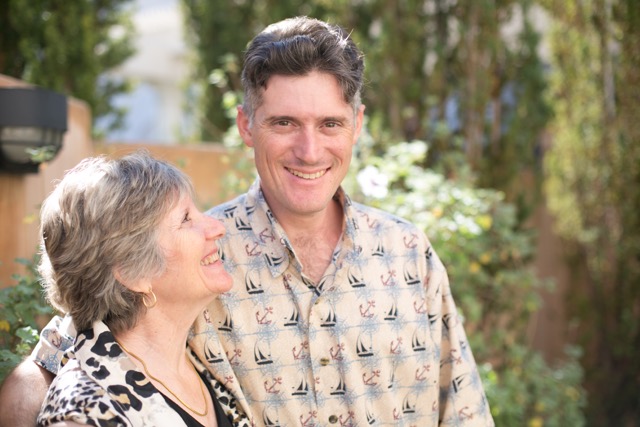 I’m Susan Hogue and I’m mom. My son is Paul and he’s had epilepsy for almost 30 years now.

The toughest thing about being a mom with a child who has epilepsy is not being able to assist in any way.

You see your child go into a seizure and there’s really nothing you can do except try to comfort them — try to cushion their head when they’ve fallen to the floor and just wait until the seizure stops.

There were years when my husband and I would take odd and even hour shifts sleeping. We’d set our alarms and every hour one of us would get up and check on him. And then every time you’d go back to bed you don’t know if something’s going to happen right after that. I didn’t even realize it until one night when I was away from the house while my husband was home with Paul and our daughter—I couldn’t sleep all night because I was so used to listening for Paul. When I couldn’t hear him breathing in the other room, I couldn’t sleep. I didn’t even realize how much it affected my sleep even during the nights. We had literally reattached the umbilical cord at age seven because we just couldn’t leave him alone.

He was maxed on two different meds and just slept for most of his days and nights. He really didn’t have a life.

We’d run the gamut of all the meds, we tried the ketogenic diet, we even tried VNS — which was extremely painful for Paul when it was activated or adjustments were made to it.

So when we first read about the RNS, I was like, “well it’s something new—we haven’t tried that yet, so let’s try that.” We were just looking for a miracle and that’s when this came along and we just happened to be at the right doctor at the right time and he qualified for it.

The RNS System has given him a completely new life. He’s a whole different person.

He actually has a life now. Before he was so over medicated and still having seizures, not sleeping well, it was really tough. But once we did the RNS, Paul just began to have a life. He could stay awake a longer and his seizures were fewer and better controlled.

The wonderful thing about the RNS System is that there’s no feeling because there’s no nerves in the brain, and so whenever the stimulation occurs, there’s no pain, no sensation at all.

Paul’s doctor is able to train the device to recognize the onset of the seizure. So when the device first recognizes it and the doctor confirms that it was a seizure, he tells the computer, “now recognize it.”

The device is trained to recognize the onset of the seizure and send the electrical stimulation. It’s so quick that there are so many times when he has seizures and we don’t even know that he’s having them.

About six months after he had the RNS, one of our friends, a big ex-football player, big tough guy, said, “you know every time Paul came over here, he just sat on the couch and went to sleep, and this was the first time Paul has been around talking to people.” And he actually got choked up, and he said, “I’ve never seen such a change in anyone. Paul is actually a person. He really has a personality and a life now.” And that was just so touching that somebody else could recognize the difference in that short of a time period. That’s the miracle that we’ve experienced. It’s just incredible.

Now, 9 years later, we call his seizures “sneezes” because one time when he had a seizure in front of a group of friends and they said, “salud” and Paul looked at me, he’s like, “I’m so embarrassed” and I go, “no they think you just sneezed!”

So we went from the drama of him having seizures in the grocery store where people would stare and point, call 9-1-1, or have to have somebody help carry him out to the car with me, to someone thinking he’s sneezing when he has a seizure! It’s been a miracle, an absolute miracle.

The RNS System has also helped with his memory and clarity because he’s not as drugged from the medications. He was able to go to Cabrillo College in Aptos, where he was able to take an art class, and play volleyball, and play tennis, and do some fun stuff he never could have done before.

Now, he only has seizures that last two to three seconds. Even when he has those, before they would have been tonic clonic or grand mal seizures that could have thrown him onto the floor— now they literally look like a sneeze. It’s just such a miracle that he can go on with his life. It’s a blessing.