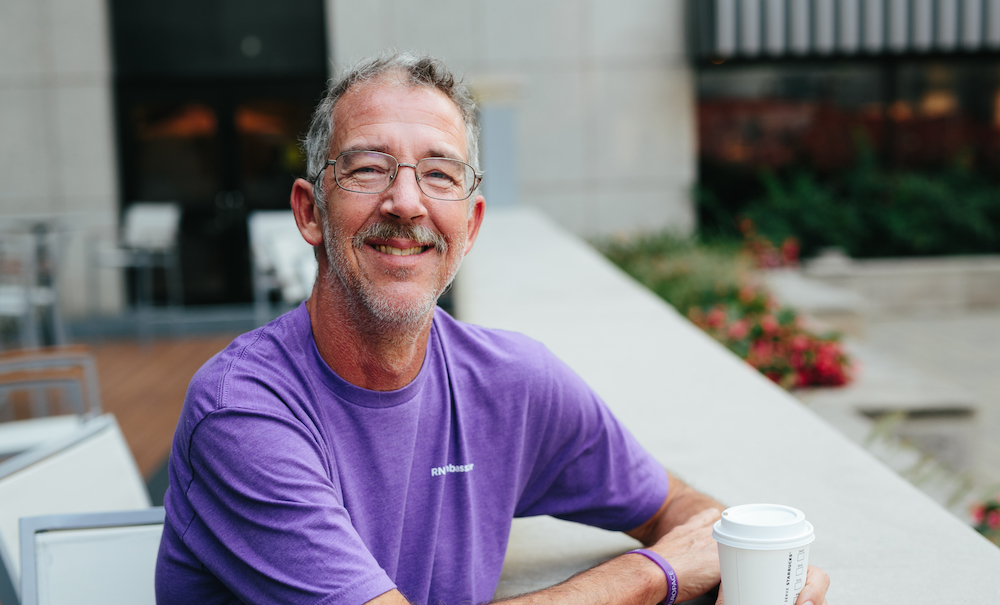 My name is Michael, and I live in Texas.

I have been living with epilepsy for more than 20 years. My epilepsy was likely caused by a severe head injury that I suffered in December 1997, but it took me almost two years after that for me to get a definitive diagnosis.

Most of my seizures are either simple/partial or partial/complex in nature. If I am sitting down when the seizure occurs, my hands typically move in a circular overhead motion.

If I’m standing, the seizure makes me step back and to the right.

If I’m walking or on a bicycle when the seizure takes place, I veer toward the right. This usually results in my sitting or falling down. I’ve been told by others that I involuntarily pull my arms up to protect my head if I fall over.

From 1999 to 2001, I tried different medications, but they could not provide long-term seizure control. In early 2001, a change in my medications caused a severe metabolic disruption that led to serious weight loss.

All of these factors forced me to leave my career in law enforcement, where I had served primarily as a patrol officer. My assignments included call response, traffic enforcement and accident investigation. I also had special training for pursuit driving.

Seeking another career path, I returned to college to study engineering, but quickly learned that the stress of high-level math and science exams would trigger seizure activity. So I switched my major to Business Management and managed to complete a BA in May 2005.
With this degree, I was able to find work as in retail management for two different companies, but ended up having to leave those jobs in 2005 and 2006 due to frequent, uncontrolled seizures.

From late 2005 through 2014, I experienced as many as 300 seizures a year. These seizures interfered with my ability to maintain steady employment, forcing me to rely on family support throughout those years.

I first learned about the RNS System in 2011 when I was undergoing a functional EEG. Although I was a qualified candidate, my doctors were not able to get me into the RNS System trials at that time. It took final FDA approval and a short wait before I could schedule my placement.

In August 2014, I finally had the procedure to implant the RNS System. It only took a few hours and involved a one-night stay at the hospital. The next day, I went home without any post-op issues.
I use the wand and the remote monitor to download stored data each night. This typically takes about 2 minutes of my time, and I’ve made a habit of doing this before I go to sleep each night, and then uploading to the Patient Data Medical System on Sunday nights. Uploading the data generally takes about 5 or 10 minutes.

For years, my mother and I have kept a diary tracking my seizure activity. Now we’re able to cross-reference information from the diary with data from the RNS System to identify specific, mostly physical seizure triggers. For example, we noted a connection between intense physical activity and seizures that occurred 1 to 2 hours later. By reducing the intensity of my physical activity, I found that I could lower the risk of having a seizure.

The diary and the information that we recorded with the magnet helped my doctor determine how to adjust the settings on my RNS System. As a result, the RNS System achieved much better seizure control over time. Right after the implantation, it was controlling about 15% of my seizures, but within just over 1 year, it was able to block more than 60% of the seizure activity.

The second year that I had the RNS System, my doctor continued to fine-tune the device settings, while also adjusting my medications. Amazingly, this led to complete seizure control.

In fact, since March 17, 2017, I have not had a single seizure and my doctor hasn’t noticed any elevated seizure activity in my RNS data.

The RNS System basically functions in the background for me. As I go about my daily life, I do not feel any physical or mental sensations from its electrical signals.

Now that I have gone more than two years without a seizure, my life has changed for the better.

Both my short-term and long-term memory have improved. I used to be extremely forgetful. I would forget that I had scheduled a 7 p.m. date with my girlfriend. Or I would miss meetings at school if I did not write myself a note and post the reminder on my desk. Now my memory is much better. I can remember not only the faces of people from my past, but also their names, even if I have not seen them in more than 20 years.

I also find it easier now to learn new information as long as I take my time and study in short bursts while avoiding marathon cram sessions. I am currently assembling the funds I need to pursue education for another degree or some form of certification/license. In preparation, I am taking various tests to find a new career that is a good fit with my skills and interests. Now that the seizures are under control, I have been able to increase the frequency and intensity of my exercise regimen. As a result, my fitness has improved. I can ride my bike a longer distance and walk or run at a faster pace. I was able to easily complete the 5k Walk for Epilepsy in Houston earlier this year.

I am also improving my strength through a combination of weights and handling tasks around the house on my own again.

After almost nine years of not being able to drive myself around, I was able to get my driver’s license back in late October 2018, just in time for my 50th birthday.

It feels great to be able to travel without relying on family or friends to drive me around. Many of my good friends live hundreds of miles away, so now I can finally drive and go visit these people that I haven’t been able to see regularly for years.

With this independence and mobility, I’m also in a position to start looking for new employment opportunities. I am hoping to find a job that will be a challenge where I can advance over time.

Being seizure-free has also helped my family. They don’t have to worry as much about my wellbeing and can feel confident that I’m able to actively take care of myself.

Instead of receiving care from others, now I’m able to help out my family. For example, I’m once again able to use a large tractor to mow and tend the pasture space on my mother’s property. I’m also able to trim and clear trees without requiring any direct supervision.

Now that I have been seizure-free for so long, I feel comfortable spending more time away from the house on my own. This gives me opportunities to meet new people. I enjoy spending time on my own exploring my community, going to museums, concerts, and movies.

I would encourage anyone who is considering getting the RNS System to learn about how the device works. For me, the RNS proved to be a positive option that offered possibilities for improvement beyond what I could get from medication alone.

That said, people considering the RNS System should realize that it may not replace their medication, but work alongside it.I’d encourage people thinking about the RNS System to speak with Neuropace Ambassadors about their experiences.

Ultimately, if your doctor believes the RNS System will be a benefit for you, I’d say don’t be afraid to go for it!