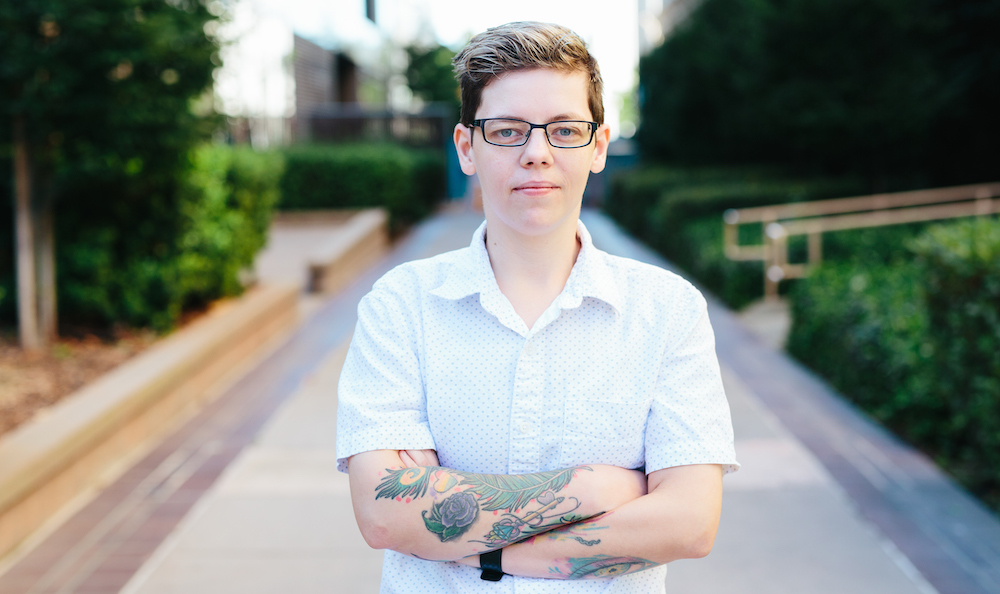 The first seizure that I can remember happened when I was about 8 years old. I didn’t understand what it meant, but suddenly I had a metallic taste in my mouth and an intense feeling of fear – like someone or something was coming after me.

I had another one of these episodes – taste of metal, feeling of fear – when I was in my late teens, but I still didn’t know that it was a seizure at that time.

It wasn’t until I was in my mid-20s when someone saw me actually have one these ‘episodes’ that I went to see a doctor and get myself checked out. My primary care doctor referred me to an epileptologist (epilepsy doctor), and that’s how I discovered I was having about 30 seizures per month, including some seizures while I sleep.

It turned out that I have a non-cancerous brain tumor that caused complex partial seizures in the front temporal lobe of the hippocampus. My doctors said that the tumor could not be surgically removed because it is located in the part of the brain associated with creating short-term memories. If they removed that part of my brain, I would lose my ability to make or keep new memories.

So we tried to manage the seizures with medications. Unfortunately, after trying 5 different medications with varying side effects, I still continued to have dozens of seizures per month. The seizures affected both my verbal and visual memory. At the time I was working as a supervisor for an inventory company, and my job involved a lot of travel. Because of the amount of seizures I was having, I had to give up my driver’s license and quit working, which was really hard on me.

Even though each of my seizures only lasted a couple of minutes, they would leave me feeling totally drained. I didn’t even have the energy to hang out with family or friends, but would sleep the day away at home.

The seizures also caused to me have constant headaches. I used to see a neurologist who specialized in migraines, but I still had to spend a lot of time lying down in my room with the lights turned low and headphones in my ears to block out noise in an attempt to cope with the headache pain.

As soon as my doctors knew surgery to remove part of my brain wasn’t an option for me, they started talking to me about the RNS System.

In June 2018, I had the surgery to implant the RNS System. The procedure went very well – even though I have a smaller head than most people! I spent three days in the hospital after the surgery and then another three weeks taking it easy at home. After that, I was able to slowly get back to normal daily activities.

The surgeon did a great job of making the surgical site not visible. Now that my hair has grown out, people looking at me would never know that I had brain surgery or have a medical device in my head unless I tell them.

The RNS System has done a great job of reducing my seizure activity. Whereas before I averaged about one seizure each day, now I only have a few seizures per month.

The seizures are much shorter and milder too. Before, each seizure would last at least two minutes. Now, I just feel the aura coming on with its metallic taste, but it quickly goes away after a second or two, and I will continue to live my life.

I’ve also been able to go back to work at the same job I had before my seizures got really bad. I have a great boss, and after I recovered from the RNS System placement procedure, she would pick me up on her way to work in the morning so I didn’t have to worry about driving.

Right before I go to sleep each night, I scan my head with the wand. It takes less than three minutes (maybe four minutes if I’ve had a seizure that day) to scan the device and download my data to a dedicated laptop. By getting into the habit of scanning the device at the same time each night, I don’t have to think about it during the day while I’m at work or engaged in my other daily activities.

I use the RNS magnet to help time stamp any seizure activity I notice. I also keep track of seizures in a ‘seizure diary’ where I write down the time, date, and any factors that might have caused the seizure. I’ll then share and discuss the seizure diary contents with my epileptologist.

For example, I’ve noticed a connection between increased seizure activity and lack of sleep, so I try to make sure that I get at least 6 hours of sleep each night.

Another major seizure trigger for me is getting my period. Before I had the RNS System, I would basically sleep the whole week as my seizures ramped up. Now I just get a headache and feel a little tired, but I’m able to maintain my usual activities.

I see my epileptologist now every three months. Every time we meet, we review the data from the RNS System. That’s how I can see that the RNS System is blocking seizures that I don’t even notice.

We also review my medications. Right now, I’m only taking a single anti-seizure drug, and we were even able to lower the dose a little bit.

I can also tell a big difference in my memory. Before, I was always pretty forgetful. Now I can easily remember things that other people say and do. My family is amazed that I’m able to rattle off my plans and schedule for the next two weeks.

My mood has also improved since I got the RNS System. I always tried to keep an upbeat attitude and use humor to make things easier – especially for my friends and family – but the amount of seizures I was having made me feel tired all the time.

Now that the RNS System is preventing so many of my seizures, my energy levels have skyrocketed I feel like I have the energy of three people – and that’s without having any caffeine!

I’ve also been able to regain my driver’s license, which has been a huge accomplishment, as that was the hardest thing for me to give up before.

The RNS System has truly changed my life. Looking back, I’m really glad that I decided to get the device. Not only have I gained more independence than I had before, but I can finally think clearly now.

I’m able to be myself, be more active in the community, and just have fun. I especially enjoy exploring parks and taking photographs. I can go to busy places now and not worry anymore about getting overwhelmed and having a seizure, which would happen sometimes before. I used to have to spend almost all my time at home – now I’m hardly ever home!

I feel like the RNS System has opened many doors in helping me deal with epilepsy. Now my goal in life is to help others with seizures know that they are not alone and that we’re all in this together.